Peak Oil is the point at which global oil producution reaches its maximum, and from there on it's all downhill. With oil demand continuing to grow, the only consequences can be shortages and rapidly increasing prices. Peak Oil is predicted by some (based on experience and scientific analysis) to occur in 2010.

An excellent site on this subject is http://www.powerswitch.org.uk

It might make you think, it might make you worry; but if we have an understanding of what the likely problems will be, we can at least prepare for them.
Posted by Anthony Day at Wednesday, December 20, 2006 1 comment:

The Independent published my letter yesterday and today there was a response from Nigel Clarke of York. (I live in York, too.)

His point was that the energy value from an acre of biofuel crop was much less than the energy value of food grown on the same area.
Posted by Anthony Day at Friday, December 15, 2006 No comments:

Apparently the UK emits 2% of the world’s CO2 or 150 million tonnes. I was confused when I saw an advertisement from the Carbon Trust talking about 648 million tonnes, so I phoned them up and then sent the following email.

“Your advertisement in today's Independent talks about annual CO2 emissions of 648m tonnes, while the DTI report "The Energy Challenge" quotes 150m tonnes. One of your customer advisors pointed out that your figure is for CO2 but the DTI figure is the carbon component only. If we take the atomic weight of carbon at 12 and oxygen at 16,carbon accounts for 12/44 of the weight of CO2, or 27%.

"The figure of 648 million tonnes of carbon dioxide (equivalent to 176.4 million tonnes of carbon) is the total UK carbon emission consumption.
This is different from the UK carbon emission production. Our figures differ from the 2002 UK Production Footprint, produced by Defra in 3 key
ways:
* Ours includes aviation fuel use;
* We use slightly higher water transport figures; and
* Our report talks about UK consumption and so includes carbon
emissions from products produced overseas and brought to the UK for consumption (e.g. Chinese T-shirts and German cars). For consistency, our figure excludes emissions from products and services which are produced in the UK but which are then sent overseas for consumption (e.g. Scotch Whisky sent to the Far East). The UK is a net importer of products and services and so our consumption footprint is higher than our production footprint as a consequence.

"There is a breakdown of these differences on page 22 of our report 'The carbon emissions generated in all that we consume', which is available from the Carbon Trust website at this link.


"Note: The figures presented in this report are in terms of carbon not carbon dioxide.”

A clear and comprehensive answer. So now we know!
Posted by Anthony Day at Wednesday, December 13, 2006 No comments: 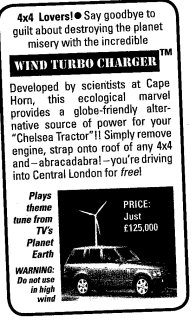 I saw this in the Private Eye Christmas Gift guide and just had to share it. Do you know a 4x4 driver with a conscience? This is just the thing for their stocking!
Posted by Anthony Day at Monday, December 11, 2006 No comments:

Here's a letter I've just sent to the Independent:

"It’s time to nail the lie that bio-fuels are carbon-neutral. (Brown’s ‘green’ tax changes hit biofuel, 8th November) Growing crops for bio-fuel absorbs the carbon that bio-fuels emit, but it does not remove the emissions created in planting, fertilising, harvesting, transporting and processing these crops before they can be made into fuel.
Bio-fuels are not green. The EU demands that 5.75% of all road fuel should be biofuel by next year but we will have to import the crops to meet this target because Europe does not have enough agricultural land. In Brazil they cut down the rain forest to grow more sugar cane for ethanol; in Malaysia they cut down the rain forest to grow oil palms; in the US they subsidise the production of ethanol from wheat and maize, leaving less grain surpluses for needy nations.
The truth is that in the face of climate change and energy shortages we are desperately seeking substitute fuels so that we can continue our present lifestyles. It is time we managed energy demand rather than assuming we will always be able to expand supply. We must plan for fundamental changes; otherwise the imminent oil shock, gas shock, electricity shock and very-cold-houses shock really will be a shock."
Posted by Anthony Day at Sunday, December 10, 2006 No comments:

How green is Brown?

New green taxes were expected in yesterday's pre-budget statement, and when they came they upset the environmental lobby and everyone else as well.

Sir Nicholas Stern's recent report on the costs of climate change said that every country should devote 1% of GDP to combating climate change, but the new taxes are estimated to cover little more than a tenth of that. We saw an increase in petrol duy of 1.25p/litre and a doubling of air passenger duty. Stamp duty will also be abolished on "zero carbon-emission" homes for a limited period. This will apparently encourage more to be built, though there will be no immediate benefit from the new rules because there is no stamp duty on new homes, only on the sale of existing properties. Apparently such homes could save 8m tonnes of carbon per annum by 2050; not a great deal compared with the UK's total annual emissions of 150m tonnes.

The petrol duty was seen as not nearly enough by Greenpeace. They wanted the Chancellor to bring back the "fuel escalator" which added regualr increases to the price until the government abandoned it in 2000 in the face of the fuel protests which blockaded refineries. Transport organisations said the increase was unjustified as it would simply put up the prices of everything in the shops. There was criticism of the air passenger levy as well: it would not stop people flying but simply cost them more.

The whole problem with green taxes is surely that if people pay them, the policy has failed. If taxes are supposed to stop people doing things that will harm the environment they will only work if people have an alternative. Otherwise, it's just gesture politics and another way of getting money out of people!
Posted by Anthony Day at Thursday, December 07, 2006 No comments: