The Great and the Good

This week I’m talking about the great and the good and what they have to say about climate change. I joined the mass lobby of Parliament on Wednesday to find out what my MP had to say about it. There’s a changing environmental policy in the wind, although we didn’t know that for sure until Thursday. On Thursday I was at the Energy Exchange in London talking about community energy. On Saturday 13th June I spoke to the Professional Speaking Association in London about sustainable futures and how to be here when you’re really somewhere else. And then there was that hippo coming down the High Street....

Last week the world leaders at the G7 conference (the great) made their pronouncements about phasing out fossil fuels. This week the Pope (the good)  issued his encyclical on taking care of the planet. This in spite of Lord Monckton  recently telling him: ”it is not the business of the church to pronounce on science.”
An encyclical is a letter of guidance to all catholics, seen as very important because they are not issued very often. The pope made it clear that he wanted to address this one to all the people of the world. He didn’t mention carbon pricing, but he was very specific about many things. He said that climate change was a risk to the world and particularly to poorer nations. He said it was caused by the use of fossil fuels, that these should be phased out and that renewable energy should be developed. He condemned the throwaway culture and said he wanted to contribute to December’s international conference in Paris on climate change, COP21.

Unsurprisingly there was a wide range of reactions. Greenpeace has been strangely silent, but Friends of the Earth’s head of campaigns Andrew Pendleton said:
“The Pope has shown impressive and inspiring leadership where many elected leaders have failed. He is both a friend of the earth and of the millions of people in poorer, vulnerable nations whose lives are already being shattered by extreme weather.”

Republican presidential hopeful and Catholic Jeb Bush said “I hope I’m not going to get castigated for saying this by my priest back home, but I don’t get economic policy from my bishops or my cardinals or my pope,” Another Republican senator from Texas said: "I don't want to be disrespectful, but I don't consider him an expert on environmental issues.” Of course that’s an easy argument. It’s one that arch-denialist Lord Lawson has used against economist Lord Stern. Very few of us are experts. It's up to us to seek out experts and determine whether their opinions are credible and well-founded. After all, the senator from Texas must have got his information on climate change from somewhere, and presumably he is not personally an expert.

On Wednesday there was a mass lobby of MPs at Westminster to find out where they stood on climate change. I went down with others from York and while I was waiting for our MP to come out and meet us I wandered round and asked people why they had decided to come. You'll have to listen to the podcast to find out what they said. http://www.anthony-day.com/sustainable-futures-show/ One of them was an artist. 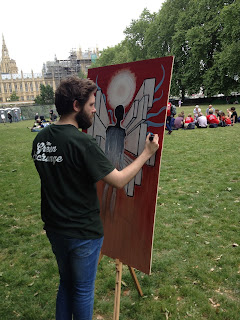 Our MP for York Central, Rachael Maskell, came out and spent half an hour talking to us. I didn't vote for her but I was quite impressed that she was well briefed and enthusiastic. She said she saw climate change as the priority because it is fundamental to everything else that we want to achieve. She's a very new backbench opposition MP so what she can achieve is limited. However she promised to keep in touch and offered to put down Parliamentary questions and enter in debates, so I'm sure we will certainly keep her to that. 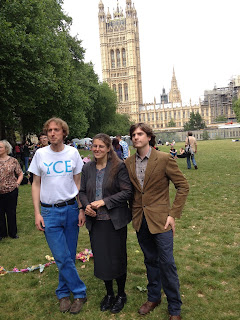 The big news on Thursday morning was that new onshore wind farms would be excluded from the Renewables Obligation subsidy scheme from 1 April 2016, a year earlier than expected. Roger Harrabin, environment analyst at the BBC said: “The Conservatives promised in their manifesto to hold down bills and increase renewable energy, but onshore wind is the cheapest readily-available form of clean energy in the UK. That's why some experts have described their decision to kill the onshore wind programme as bizarre and irrational.” 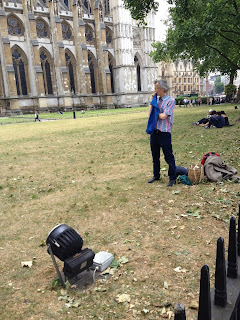 New minister Amber Rudd told business leaders that it was time to shift subsidies from onshore wind to other technologies that needed them more. But she did not say what those technologies would be, and the government has not announced compensatory subsidies for other forms of energy. There was a lot of support for Amber Rudd when she took office as the new Secretary of State for Energy and Climate Change. However green her ideals she seems to be imprisoned by the party and bound to enforce the dogma laid out in the election manifesto. The problem is that yet again the government is changing course at short notice, and once again this will cause loss of confidence and loss of jobs in an industry which is key to a low carbon future. We have a skills shortage, but if industry loses the confidence to invest we’ll lose what skilled personnel we have to more far-sighted competitors like Germany and the Scandinavian countries. 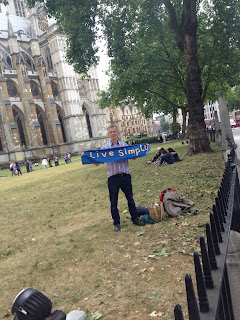 On Thursday I was at the Energy Exchange in Westminster; in fact I chaired four expert panels. The event was organised by Enterprise Events and was principally designed for local authority officers. The twelve panellists were experts in their fields and covered Energy Leadership, Community Energy Projects, Lessons Learned from District Heating and Opportunities in energy generation, distribution and supply. I can’t do them all justice, so I won’t pick any one out. Suffice it to say that they came from as far away as Halifax and Plymouth, Coventry and Camden and all points in between. There were some pretty interesting people in the audience as well. It is very encouraging to find so many committed and highly professional specialists despite the constant denialism in the popular press and the government indecision already mentioned. If you want to save money on energy why not consider a community generation scheme - wind, hydro or solar? Your council can help, and may already be backing schemes in your area. One idea I loved was solar canopies for carparks. Well it’s obvious. All that space. And it keeps the cars cool as well!

On Saturday 13th I spoke to the London group of the Professional Speaking Association about Sustainable Futures. They asked me particularly to talk about environmentally responsible travel, because if you’re a professional speaker, particularly an international speaker, you’re constantly on the move. Environmentally responsible travel? That’s walking, isn’t it? Or cycling. Public transport has a small carbon footprint per passenger, but a car with only one person in it is many times worse. And don’t mention air travel! The point I made was that when the oil price goes back up air travel could become extremely expensive. (Will it go up? Yes, it’s artificially low at present; the Saudis are causing a glut. Yes, it’s running out. Why else did BP need Deepwater Horizon, why else is Shell preparing to drill in the Arctic against all opposition and why else is the UK government doing everything it can to force through fracking? And yes, if governments are really serious about controlling carbon emissions at COP21 in December they’ll have to introduce a realistic price for carbon and that will drive up the oil price as well.) If there’s no substitute for oil for aviation and fares go up then established international speakers will probably be OK. Event organisers will still book people they can rely on. They are less likely to gamble the fare on newcomers, so it could be more difficult to break into the market. But don’t rule out electric planes. Siemens and Airbus have already got experimental ones flying. A subject for another day, perhaps.

But what if you can’t get to the conference? Is telepresence the next big thing? Telepresence is creating a 3D holographic image of a person in real time and broadcasting it to a remote location - or several locations. Prince Charles recently addressed a conference in Abu Dhabi. He was there on stage. Only he wasn’t. He was thousands of miles away in Windsor Castle. It will involve energy, it will involve bandwidth, but I bet the carbon footprint is a lot less than a return flight. You can hear the whole speech on The Sustainable Futures Show - episode 26-06-2015 - http://www.anthony-day.com/sustainable-futures-show/

And finally, image of the week. Did you see that picture of the hippopotamus charging down the main street of Tbilisi? It would have been funny if it wasn’t tragic. Exceptional floods overwhelmed the city and washed out the zoo, releasing animals into the streets. I think the hippo was tranquillised, but lions and tiger were shot dead because they were terrorising people. Climate change has a lot to answer for!

That’s it for another week. I hope you have a good one. This is Anthony Day and this blog is brought to you completely free of charge and totally without advertising. If you like it  please tell your friends. If you don’t, please tell me. If you’re an expert and would like to be interviewed on the Sustainable Futures Show I’d love to hear from you. I’ve got several topics coming up, including electric cars and the prospects for success at COP21. Always open for your ideas. Send them to mail@anthony-day.com.