News from all Parts

This episode was published as a podcast on Friday 4th March at susbiz.biz 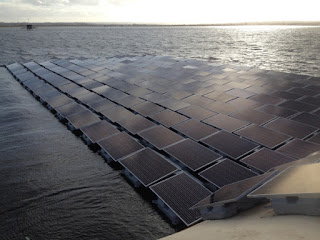 There’s a lot of different stories in the news at the moment. Al Gore’s back and he’s optimistic. Oil is making the news again in several different ways. Thames Water is floating a new idea for installing solar panels, Google has had a crash, Client Earth is suing the government, we’ve had the warmest winter since 1659 and plastic microbeads are a bigger problem than you might think.

Yes, this is Anthony Day with the Sustainable Futures Report for Friday 4th March.

Before we start, let me remind you that booking is open for the Sustainable Best Practice Exchange which takes place in Harrogate on 14th April. The opening keynote speaker will be Wouter Van Tol, Director of sustainability and citizenship at Samsung Electronics Europe. Go to sbpe.co.uk

In his latest TED talk Al Gore makes the case for optimism on climate change.

Al Gore has three questions about climate change and our future. First: Do we have to change? Each day, global-warming pollution traps as much heat energy as would be released by 400,000 Hiroshima-class atomic bombs. This trapped heat is leading to stronger storms and more extreme floods, he says: "Every night on the TV news now is like a nature hike through the Book of Revelation." Second question: Can we change? We've already started. So then, the big question: Will we change? In this challenging, inspiring talk, Gore says yes. "When any great moral challenge is ultimately resolved into a binary choice between what is right and what is wrong, the outcome is foreordained because of who we are as human beings," he says. "That is why we're going to win this.” Watch it now, well, after you’ve listened to the rest of this. You’ll find it at TED.com

We can trap some of that heat and energy that Al Gore’s talking about with solar panels, but one problem with that is finding somewhere to put them, especially in the crowded southeast of England.
Europe’s biggest ever floating solar panel array is being installed on London’s Queen Elizabeth II reservoir as part of Thames Water’s ambitious bid to self-generate a third of its own energy by 2020.

According to the press release, just over 23,000 solar photovoltaic (PV) panels will be floated on the reservoir near Walton-on-Thames, utilising a normally redundant suburban space on the surface, following an agreement between Thames Water, Ennoviga Solar and Lightsource Renewable Energy.
The innovative floating pontoon will cover around a tenth of the reservoir – enough to fill eight Wembley football pitches.

The low carbon, renewable energy produced will be used to help power the nearby water treatment works putting downward pressure on customer bills. It will have a total installed peak capacity of 6.3 megawatts and is expected to generate 5.8 million kilowatt hours in its first year – equivalent to the annual consumption of around 1,800 homes.

As well as setting a target of generating 33% of its own renewable energy by 2020, Thames Water is striving to become more efficient to reduce its reliance on the grid. It generated a total of 12.5% of its electricity requirements from renewable sources in 2014/2015, which is a 4% increase on the year before. In 2015, Thames Water pledged to support the objectives of the Paris Agreement to limit the global temperature rise to less than 2 degrees Celsius and this project will contribute to achieving this goal.

As we’ve said before, it’s businesses, not governments, that are taking the lead in fulfilling the Paris Agreement.

At the Green Party Conference, leader Natalie Bennett called for a ban on microbeads in cosmetic products.
She said: “The government’s plan to work with the cosmetics industry for a voluntary phase-out is simply inadequate. They have acknowledged that these cause biological and toxicological harm in the oceans, but they are failing to act.

“The United States, with the full backing even of Republicans, has agreed a ban by April 2017. Britain surely can act as quickly, if not quicker.”

Microbeads are tiny solid plastic balls and can be found in some toothpastes, body scrubs and other cosmetics and give products a “speckled” appearance.
The beads serve an aesthetic purpose but some manufacturers also claim they can help with exfoliation or cleaning.
However they do not biodegrade and so can cause environmental damage when washed down the drain.
They are not filtered out by water treatment plans and it has been suggested that they can carry toxins once they themselves become contaminated. Scientists around the world are worried about the health implications to humans who eat seafood contaminated by these micro-plastics. Seabirds who mistake them for food may also be at risk.

You can download an app from beatthemicrobead.org which will enable you to identify products which contain microbeads, so you can avoid buying them. It’s been suggested that if we go on as we are there will be as much plastic as fish in the oceans by 2050.

And now here is the weather forecast. It's going to snow, but you can't grumble because the Met office has just reported that we have been through the warmest winter in England since 1659. Temperatures have averaged 7℃, beating the   previous 6.8℃ record which was set in 1868. Maybe there is something in this global warming thing.

Client Earth at clientearth.org is a group of activist lawyers committed to securing a healthy planet. An estimated 40,000 people are killed by air pollution in the UK each year, according to a new report from the Royal College of Physicians (RCP). It says emissions from diesel vehicles have to be tackled to reduce the terrible toll of air pollution on our health.

Commenting on the report, ClientEarth lawyer, Alan Andrews, said: “The fact that these highly respected institutions - the European Environment Agency, the World Health Organisation, The Royal College of Paediatrics and Child Health, as well as the Royal College of Physicians -
have felt moved to produce such a strong report on the devastating health effects of air pollution in the UK should press the government into urgent action. All we’ve seen from the authorities to this point has been feet-dragging and excuses.”

You're listening to Anthony day with the sustainable futures report. Before we talk about the all industry here’s news just in from America:

Google is continuing to experiment with self driving cars and this week one of them hit a bus. It was a very low speed collision and no-one was hurt. It's the price of research.

According to Bloomberg, electric cars are going to cause significant damage - to the oil industry.
Reporting for Bloomberg Business, Tom Randall says

"It’s looking like the 2020s will be the decade of the electric car. Battery prices fell 35 percent last year and are on a trajectory to make unsubsidized electric vehicles as affordable as their gasoline counterparts in the next six years, according to a new analysis of the electric-vehicle market by Bloomberg New Energy Finance (BNEF). That will be the start of a real mass-market liftoff for electric cars.
"By 2040, long-range electric cars will cost less than $22,000 (in today’s dollars), according to the projections. Thirty-five percent of new cars worldwide will have a plug.
"This isn’t something oil markets are planning for, and it’s easy to see why. Plug-in cars make up just one-tenth of 1 percent of the global car market today. They’re a rarity on the streets of most countries and still cost significantly more than similar gasoline burners. OPEC maintains that electric vehicles (EVs) will make up just 1 percent of cars in 2040. Last year ConocoPhillips Chief Executive Officer Ryan Lance told me EVs won’t have a material impact for another 50 years—probably not in his lifetime.
"But here’s what we know: In the next few years, Tesla, Chevy, and Nissan plan to start selling long-range electric cars in the $30,000 range. Other carmakers and tech companies are investing billions on dozens of new models. By 2020, some of these will cost less and perform better than their gasoline counterparts. The aim would be to match the success of Tesla’s Model S, which now outsells its competitors in the large luxury class in the U.S. The question then is how much oil demand will these cars displace? And when will the reduced demand be enough to tip the scales and cause the next oil crisis?
We found that electric vehicles could displace oil demand of 2 million barrels a day as early as 2023. That would create a glut of oil equivalent to what triggered the 2014 oil crisis."

Of course, there are several questions that need to be answered. Will car manufacturers bring down prices as rapidly as predicted? Will there be enough electricity? Will there be an infrastructure of charging points?

I asked James Spencer of Portland Fuels for his opinion.

I believe this is (roughly) what is going to happen, he said,  and as I have said before, it will be business (ie, the car companies) that will enable the change. The rapid development of battery technology will be the game changer.

However, there are still challenges in the argument presented;

Big Oil faces courtroom showdown, says Jeremy Leggett. You remember Jeremy published his book, The Winning of the Carbon War, which reached its climax at the time of the Paris conference last year. You can buy it from jeremyleggett.net. All profits to the SolarAid charity.

He reports that ExxonMobil is being investigated by the Attorneys General of New York and California with a view to criminal charges for securities fraud and racketeering over their stance on climate change. The ramifications are enormous for the course of the global energy transition.

The oil and gas giant stands accused of lying to its shareholders for many years. On the one hand it professed that climate change was a green scaremongers’ invention, and paid many millions of dollars to organisations devoted to torpedoing the international climate negotiations that began in 1991. Meanwhile, on the other hand, it suppressed its own research proving the dangers of climate change, yet built assumptions of global-warming-driven sea-level rise into engineering of coastal and offshore infrastructure.

Why does this make me think about the tobacco industry? Anyway, you can find more on this story at jeremyleggett.net

Do you remember the Gatwick Gusher?  In April last year
UK Oil & Gas claimed to have found 100 billion barrels of oil beneath the Weald in southeast England. Their shares went wild. At the time I wondered how the UK Geological Survey could have missed it, but then things quietened down. This week UK Oil & Gas announced that their exploratory drillings have revealed a potential 1,360 barrels/day from their two site. Their share price rose 14% on the news. Oil is trading at around $37/barrel at present. Is that enough to make producing the oil viable?

According to oilprice.com, investors have pumped a whopping $9.2 billion in new equity into US energy companies year to date, the most since Bloomberg records began in 1999.
Even the experts, they say, are stunned by this unprecedented glut in stupidity of managers of other people's money: "Billions of dollars of dilutive equity continue to roll in with seemingly no end in sight," Houston-based oil investment bank Tudor, Pickering, Holt & Co. said in a research note.

I think the key phrase is “other people’s money”. I hope it’s not yours or mine.

And that’s it for another Sustainable Futures Report. I’m Anthony Day, speaker, writer, conference chair and workshop leader. Come and meet me at the Sustainable Best Practice Exchange in Harrogate on 14th April.

Of course there will be several more episodes of the Sustainable Futures Report before then. Listen again next week.