An Interview with Manda Scott

Hello, this is Anthony Day with the latest Sustainable Futures Report for Friday 18th November. This episode is mainly devoted to an interview with author Manda Scott, but before we go into that here’s a couple of items of news. 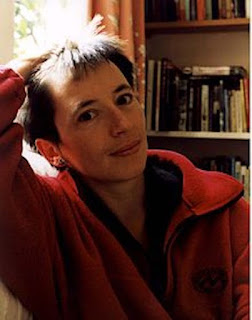 You’ll remember that there’s a group of American children
alleging in court that the Federal Government is violating their constitutional and public trust rights by promoting the use of fossil fuels. The government and the fossil fuel industry urged the court to dismiss the case but the judge refused so the appeal went to the next level. Last Thursday District Court Judge Ann Aiken rejected all arguments to dismiss raised by the federal government and fossil fuel industry, determining that the young plaintiffs' constitutional and public trust claims could proceed. Dr. James Hansen said, "This is a critical step toward solution of the climate problem and none to soon as climate change is accelerating.”

Like the recent ruling on Article 50 and Brexit by the High Court in London, this is a legal decision, not a political decision. Therefore, in spite of President-elect Trump’s denialism, there is probably not much he can do about it.

Nonetheless, Trump has appointed a prominent climate skeptic, Myron Ebell, to lead his transition team at EPA. Ebell, who leads the Center for Energy and Environment at the right-leaning Competitive Enterprise Institute, has warned against climate "alarmism" and called the agency's Clean Power Plan, issued in August 2015, “illegal." Oilman Harold Hamm, CEO of Continental Resources, has been  named as a potential candidate to lead the department of energy.

We can only stand and watch.

And so to the interview. This was recorded on 4th November, before the result of the American presidential election was known. Manda Scott studied to be a vet, has become a successful historical novelist and is now taking time out to study economics for the transition. In a wide-ranging interview we spoke about compulsory voting, where the money comes from, better selection of lawmakers, reframing ideas, the end of TINA and GDP growth, political tribalism, regenerative farming, subsidising fossil fuels, the sixth mass extinction, climate change denial and supply chains.

Unfortunately there is no transcript of Manda's interview but you can listen to it at www.susbiz.biz.

Oh, and after the main interview she gave me a sneak preview of what her next book will be about.