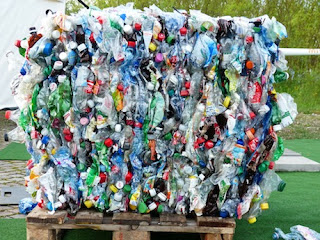 Hello and welcome to the Sustainable Futures Report for Friday, 12 October. This episode is going to be all about plastic, one of the wonders and one of the curses of modern life.
I’m Anthony Day and before we start let me thank my patrons for their continuing support. I'm delighted to say that the number of people accessing this podcast in September was by far the highest so far this year. I'm delighted to be reaching more and more people all over the world.
Before we Start
Before we talk about plastic, just a couple of news items which I picked up.
IPCC
You’ll know that the IPCC report I spoke about last time has indeed been published this week, despite confusing messages on the IPCC website. “Global warming must not exceed 1.5C, warns landmark UN report”  I will look at it in detail for next time.
https://www.theguardian.com/environment/2018/oct/08/global-warming-must-not-exceed-15c-warns-landmark-un-report
Fuel Duty
You probably heard, at least you may have if you're in the UK, that the government will freeze fuel duty at its current level for the ninth year in succession. That will mean that the Treasury has to find £800 million from somewhere else and of course there will be no effect on consumption or on emissions levels.
Flying Green?
On the other hand there is good news from Virgin Atlantic. This week the first commercial flight partly fuelled by recycled waste landed in the UK from Orlando, Florida. The flight’s fuel blend was 5% recycled, but the sustainable element could apparently form up to 50%.
It was produced in the US by LanzaTech, which claims it could eventually supply about 20% of the aviation industry’s fuel, and cut greenhouse gas emissions by 65% compared with conventional petroleum. Virgin is bidding for government support to have plants built in the UK that could fuel all its operations.
Something like this is certainly going to have to be done if we are to continue with aviation and have any hope of meeting our emissions targets.
https://www.theguardian.com/business/2018/oct/03/first-commercial-flight-partly-fuelled-by-recycled-waste-lands-in-uk
Stormy Weather
And then there is the weather. Another week of extreme weather events. British tourists killed by flash floods in Majorca. Residents in Florida and Georgia killed by Hurricane Michael, which even now is devastating the Carolinas. And this only a couple of weeks after Hurricane Florence.
https://www.theguardian.com/world/2018/oct/10/uk-couple-reportedly-killed-mallorca-spain-flooding

And that’s it
And that’s it for another week. Apologies to Patrons who did not get the Sustainable Futures Report early this time. I normally publish at 01.00am on a Friday morning and it’s currently about 10 o’clock on Thursday night [at the time of recording] and I’m still putting it together. And I’ve driven 250 miles today. Anyway..

I’m Anthony Day.
That was the Sustainable Futures Report.
There will be another one next week.