Climate Change is bad for your health - official

I’m talking about fracking - of course, about wind - again, about suing the government and about waiting for trains.  But first of all - it’s official. Medical opinion states that climate change is bad for you!

The Lancet, a peer-reviewed medical journal, this week published its second review on climate change. There’s a short video on thelancet.com which is worth a look. Review authors Helen Wang and Richard Horton state that the risks from climate change are not only serious but potentially catastrophic. Loss of life can be directly caused by extreme weather, such as floods and heatwaves. Indirect causes are poor water quality, air pollution and ecological change. Global warming leads to sea-level rise, which in turn causes mass migrations, pressure on resources and can lead to conflict. As heatwaves become more common, more people are affected. Those over 65 are more vulnerable, and population statistics show a disproportionate number of older people concentrated in areas likely to experience extreme temperatures.

The report, like the G7 ministers and Pope, calls for fossil fuels to be phased out. 80% of the world’s energy currently comes from fossil fuels and emissions cause poor air quality which in turn causes heart attacks and lung disease, as well as long-term effects on health. For the authors it’s not all bad news. They see that responding to climate change could be the greatest global health opportunity of the 21st century. The level of understanding of the importance of climate change varies widely across the world, with some of the poorest  understanding in some of the most developed countries. The science is clear, the technological solutions are available. It is now entirely  a matter of political commitment. The report urges medical  professionals to go out and spread the word.

Incidentally there’s a heatwave currently affecting Pakistan, where temperatures of 45C and more are proving fatal. The situation is made worse by water shortages and because many people are fasting for Ramadan. There’s a serious drought in Puerto Rico and other parts of the Caribbean as well.

Talking of political commitment, I noted last week that the government was cutting subsidies to on-shore wind by withdrawing the Renewables Obligation scheme from April 2016, a year earlier than originally promised. Minister Amber Rudd told Parliament this week that as a result some 250 schemes were unlikely to go ahead. She also hinted that Contract for Difference, a key factor in determining project viability, could also be withdrawn. Once again investors have been encouraged to develop long-term infrastructure projects, only to have the rules changed at short notice. The Scottish government is particularly annoyed by this as around 70% of the projects likely to be affected are located in Scotland. Fergus Ewing, the Scottish Energy Minister, has invited Ms Rudd for talks in Scotland. The local industry fears that the changes could cost it as much as £3bn. It will be interesting to see if the minister accepts the invitation, and even more interesting to hear what she has to say.

Fracking is in the news again. Cuadrilla has applied for planning permission for test drilling followed by test fracking in Lancashire. There are two sites involved: Little Plumpton  and Roseacre Wood. The council has been advised by its planning officers to approve the application, but there is much local opposition. The council rejected the Roseacre Wood scheme on the grounds that there would be an unacceptable increase of heavy vehicle traffic in the area.

The decision on Little Plumpton was deferred until Monday 29th to allow councillors to take legal advice. This advice has now been published, and warned that if councillors refused the application it was unlikely that they would win on appeal, and if they lost the council would have to bear the legal costs. It seems highly likely that the Little Plumpton application will be approved, even though many councillors oppose it and so do many residents.

Citizens in the Netherlands have called their government to account and claimed that more must be done to tackle climate change. 886 private citizens went to court to demand urgent action - and they won. The Netherlands are on the way to a 17% reduction in GHG emissions  from 1990 levels by 2020, but that’s not good enough for the litigants. They persuaded the judge to rule:“The State also has to ensure that the Dutch emissions in the year 2020 will be at least 25 percent lower than those in 1990." Of course the government will appeal. It’s also not clear how the government could be held to the judgement. If they fail to comply would they get fined? What good would that do? At least the case demonstrates that there are concerned citizens across the world, and the case is robust enough to be held up in law.

Not a good week for transport, especially electric transport. The British government announced yesterday that they were “pausing” two major rail electrification schemes for lack of funds. The Great Western electrification is now expected to cost three times the original estimate and other schemes are also over budget. This means that the electrification of the Midland main line and the link from Leeds to Manchester are postponed indefinitely. So much for the powerhouse of the north! Leeds and Manchester are 45 miles apart. Most trains take 56 minutes for the journey. Bits of it are quite fast, but for some reason the second part is usually at walking pace or less. The government has blamed Network Rail, now legally part of the civil service and therefore under the direct control of ministers. The chairman has been fired and senior executives won’t get bonuses. Cold comfort for the many passengers who won’t now get new trains!

The other bad news was an electric bus which burst into flames in York. The Optare Versa is a widely-used bus, available as a diesel, diesel-electric hybrid or, as in this case, pure electric. In electric form it has a range of 70-90 miles and York recently took delivery of a fleet of 12 to provide a shuttle service to the park and ride locations on the edge of the city. No-one was hurt in the blaze, but the rear of the bus was severely damaged. A loud bang was heard, and popular headlines claimed that the engine blew up. More probably it was a fault in the lithium-ion batteries. Battery technology has moved so far that we don’t need trolley buses any more; buses can carry as much power as they need in batteries. This means that we are pushing battery technology to the limit. Do you remember Boeing’s 787 Dreamliner, grounded a few years ago because of fires in the lithium-ion batteries? York’s remaining 11 electric buses are back in service today after full safety checks. They won’t let one mishap prejudice the future of clean transport. (Although if you look at the pictures of the smoke, that burning bus must have had one hell of a carbon footprint!) 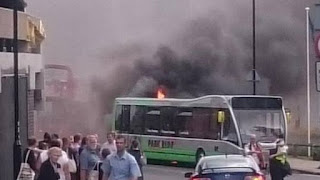 That’s nearly it for this week. But not quite! Don’t forget that the next instalment of “The Winning of the Carbon War” will be out on 1st July. It’s free. Find it at jeremyleggett.net  I told you that I made a presentation to the Professional Speaking Association in London. . It will be out on Video shortly, both the full 30-minute version and edited highlights, which will probably come down to 2 minutes.

Either way, there will be another episode of the Sustainable Futures Show next week. Listen at http://www.anthony-day.com/sustainable-futures-show/ , and if you have any comments ideas or suggestions get in touch via mail@anthony-day.com.