It Won't Go Away!

It Won’t Go Away!
It's Friday, it's 28th June, I'm Anthony Day and this is your latest Sustainable Futures Report. Welcome. In the week when Network Rail told its staff that if they needed to travel on business they should not take the train if it was cheaper to fly, I bring you yet more on plastic pollution– It's just won't go away. 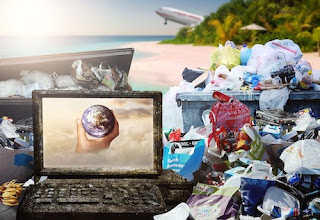 Can we cut carbon dioxide by using direct air capture? Patron Tom de Simone provides some clues. We look at global heating, heatwaves and melting ice caps. Are the fashion industry and the rise of artificial intelligence working against us? Client Earth had a musical windfall this week, a peaceful protester was manhandled from London’s Mansion House, they do things differently in Scotland and it could be OK to eat meat again - as long as it’s not made from animals.

Patrons Only
Now here’s a special announcement exclusively for patrons. I think it’s time we got together on line to share ideas and discuss pressing climate issues. I’m going to set something up and I’ll publish details to all patrons via the Patreon site very shortly. If you’d like to become a patron and support the Sustainable Futures Report with as little as $1 per month please go across to patreon.com/sfr for all the details.

In Other News
Heatstroke
In Bihar, one of the poorest areas of India, 49 people died on Saturday of heatstroke in just 24 hours.
With temperatures in Bihar hovering consistently at around 45C (113F), hospitals were inundated with people suffering from heatstroke. The death toll has since risen to at least 60 and, with many heatstroke victims still in hospital, is expected to rise further.
Melting Icefields
The Guardian and other papers published a picture of scientists riding their dog sleds out across the ice sheet in Northern Greenland. The dogs are wading through ankle-deep meltwater.
European Dissent
Meanwhile, Poland, Hungary and the Czech Republic have refused to sign up to an EU document setting out a net-zero carbon emissions target for 2050.
Ethical Investing
On the other hand, an ethical investment operation by the UK’s largest asset manager, Legal and General Investment Management, has dumped shares in a string of US companies it has deemed climate crisis laggards, including oil giant ExxonMobil and insurer Metlife.
Citizens’ assembly
Six House of Commons select committees have announced that a citizens’ assembly on the climate crisis will be set up later in the year. It is the second of the three demands made by the Extinction Rebellion. Mrs May has already addressed their first demand for a zero-carbon Britain, although she did not go as far as their third demand, which was that this should be achieved by 2025.
Wellbeing
Last week I spoke about New Zealand’s Wellbeing Budget. Richard Lane tells me that Scotland has a National Performance Framework setting out a range of non-economic measures of its worth as a country and charting its progress to improve them. There’s a link on the blog.

And finally,
David Gilmour of Pink Floyd has just sold 120 of his guitars and decided to donate the proceeds to a good cause. This means that Client Earth receives £17m. I’ve mentioned Client Earth several times previously and its actions against the British government for not acting to clean up illegal levels of air pollution.
James Thornton, ClientEarth CEO said: “I’d like to express my deep and heartfelt gratitude to David Gilmour for this utterly remarkable gift. David has a long history of supporting charities and I am honoured that he has chosen ClientEarth to benefit from this landmark auction.
“ClientEarth is working across the world, using the law to fight climate change and protect nature, and this gift will do an enormous amount to support our efforts to ensure a sustainable and hospitable planet for future generations”

Scotland has a National Performance Framework setting out a range of non-economic measures of its worth as a country and charting its progress to improve them:


https://www.clientearth.org/david-gilmour-to-donate-proceeds-from-guitar-auction-to-clientearth/
Posted by Anthony Day at Friday, June 28, 2019 No comments: