I’m Anthony Day and this is your Sustainable Futures Report for Friday 22nd March. Remember, the text version of every episode with links to all my sources is on the blog at www.sustainablefutures.report.
Vox pop–the voice of the people. 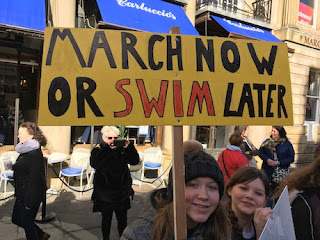 https://www.kcl.ac.uk/lsm/research/divisions/aalb/newsevents/newsarchive/featured/exhale
Less Gas, More Hot Air
In his Spring statement the Chancellor of the Exchequer said that to help meet climate targets, the government would advance the decarbonisation of gas supplies by increasing the proportion of green gas in the grid, helping to reduce dependence on burning natural gas in homes and businesses. To help ensure consumer energy bills would be low and homes would be better for the environment, the government would introduce a Future Homes Standard by 2025, so that new build homes would be future-proofed with low carbon heating and world-leading levels of energy efficiency. So that’s six years down the line, and affects only new-build, not the majority of the UK’s energy-inefficient housing. Unsurprisingly there was a mixed response from Greenpeace. They supported initiatives as far as they went - including a biodiversity assessment. (Why is that the responsibility of the Chancellor of the Exchequer - he’s the finance minister?)
Mel Evans, Senior Campaigner at Greenpeace said, “Tackling the climate emergency demands much bigger thinking. Issues like the shoddy state of our existing housing stock and rapid adoption of electric vehicles require serious money behind serious policies. A good start would be banning the sale of new petrol and diesel cars and vans by 2030. Equally, when compared to ideas like frequent fliers paying more and more heavily for trips abroad, carbon offsetting transport falls very short. Paying lip service to action, and piecemeal measures are not an option. It’s time for strong words to be matched with strong action.”

And finally,
You may have seen a recent story in the press about how Coca Cola uses 3m tonnes of plastic packaging including more than 110bn plastic bottles each year. Actually that was only part of the story. It came out of a new report published by the Ellen MacArthur Foundation on the NEW PLASTICS ECONOMY GLOBAL COMMITMENT. The Ellen MacArthur Foundation is dedicated to the promotion of the circular economy, which includes the elimination of waste by recovering used products and materials for reuse as raw materials.
The New Plastics Economy Global Commitment unites businesses, governments, and other organisations behind a common vision and targets to address plastic waste and pollution at its source. It is led by the Ellen MacArthur Foundation in collaboration with UN Environment.
Launched in October 2018, the Global Commitment already unites more than 350 organisations on its common vision of a circular economy for plastics, keeping plastics in the economy and out of the ocean. Signatories include 150 businesses, 16 governments, 26 financial institutions, WWF, the World Economic Forum and 50 academics and universities. They have all endorsed one common vision of a circular economy for plastics.
Coca-Cola is by no means the only familiar brand to have signed up to the commitment, although it is the largest user of packaging. Hardly surprising when 1.9 billion people drink their products every day. Nestlé, Pepsico, Unilever, L’Oréal and Mars have all signed up to the commitment, as well as major packaging manufacturers and 5 of the top 15 global retailers.
The Coca Cola PET bottle is 100% recyclable. The company has set a target of 100% recyclable packaging by 2025. It is currently at over 87%, as its predominant packages are already 100% recyclable.
Similar messages come from the other companies. Using recyclable packaging is great, but we still have to provide the infrastructure so that the consumer can send it back for recycling. There has got to be action - and investment - shared by the government, the manufacturers, the retailers and the consumers. 1.9 billion bottles and cans per day. That’s an awful, awful lot of rubbish to clear up.
https://www.ellenmacarthurfoundation.org/assets/downloads/GC-Report-Spring.pdf
https://www.just-drinks.com/news/coca-cola-cos-plastic-packaging-output-dwarfs-fmcg-rivals_id128004.aspx

That’s all for this week.
I’m Anthony Day and that was the Sustainable Futures Report for Friday the 22nd of March.
Thank you for listening, especially if you've got this far. Have you thought about being a patron? Your support is always much appreciated and here's a special thank-you to my existing patrons. If you'd like to join their number the website you need is www.patreon.com/sfr.
That indeed is it for now and the next episode is scheduled for 29th March. That was planned to be a highly significant day for the United Kingdom. Whether it will be or not is still up in the air at the time of writing, but that's another story.
I mentioned that I have started looking into the phenomenon of denial and I have a range of books on my shelf. I think the topic is crucial to meeting the challenge of climate change within sustainability so I'm going to spend some time on this. For this reason there will not be a Sustainable Futures Report at the Easter weekend and probably not in the following week either. Writing these broadcasts takes several days each week. I'm going to use the time for research. Oh, and we're going on holiday as well.
As I said, the next episode is next Friday.
Till then.

Links to ways you can follow Jem Bendell's work and connect with others who are incorporating Deep Adaptation framework into their lives and work.
(I’m not endorsing this - I’m still at the early stages of understanding his position.)