Reaching for the Stars


I'm Anthony Day. It's Friday, 8 September and this is the Sustainable Futures 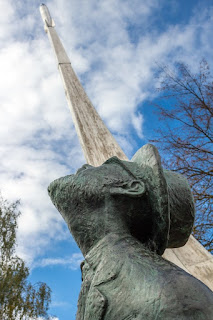 The Consolations of Philosophy by Alain de Botton claims on the cover to be the number one bestseller. Of course Stephen Hawking’s A Brief History of Time was also a bestseller. Everyone bought it, but few actually read it: even less understood it. De Botton’s work is not nearly as deep and technical as A Brief History, but it wanders and confuses. The main thesis is that philosophy can console us for some of life's concerns. Thus it sets out how philosophy can console us for being unpopular, having no money and so on. The first chapter on the Socratic method of argument is a useful guide to presenting arguments and dealing with denialists. I'd leave the rest to another time. I know that Alain de Botton has a significant reputation. Maybe this book was the wrong one to start getting to know him.
Bye for now!
Right, I’m off to catch up on my reading! I’m Anthony Day and that’s the Sustainable Futures Report for another week. I’ll be back on 15th September. I hope very much that you will be too.

Bye for now!
Posted by Anthony Day at Friday, September 08, 2017 No comments: