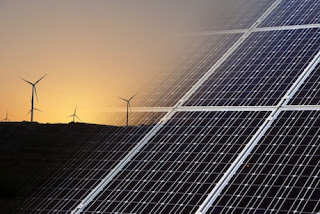 Not a word about the election. I’m sure you’ve heard far too much from multiple sources already. Oh, all right - just one word. This government. It’s not sustainable you know. And that Michael Gove for Environment Minister? A former Education Secretary who is reputed to have attempted to exclude climate change from the geography syllabus? I’m sure we’ll be talking about it at length in the future.

But now, Sustainable Energy. I recently had the pleasure of hearing Professor Andy Heyes speak about sustainable energy. I contacted him afterwards and he agreed to share his thoughts with listeners to the Sustainable Futures Report. If you’ve been to the patreon site at patreon.com/sfr you’ll know that I’ve set a number of targets. The first was to get all interviews transcribed for the blog. I haven’t reached that target yet but I thought that this interview was too important to miss, so there is a transcript here.

Professor Andrew Heyes is Head of the Department of Mechanical & Aerospace Engineering at the University of Strathclyde. He’s also visiting professor at University College London. We met in the first week of May, and here’s what we talked about.

SFR: Sustainable energy. Why do we need it?

HEYES: We need it because just about everything, every aspect of modern life requires us to consume energy; transport, heating our homes, lighting our homes, entertainment, so just about every aspect of modern life requires energy but the sources that we currently use to get energy are finite and we are consuming them at a rate which is not sustainable. Take fossil fuels as an example; took nature hundreds of millions of years to accumulate the fossil fuels that are existing in the earth's crust but we will consume or we could consume if we don't change our current trajectory, we could consume all of that in the space of a few hundred years. So that's clearly not sustainable; so were we to carry on and not find alternative sources of energy our current sources would run out so we need to find energy that we can consume at a rate where, that we can continue to consume for the foreseeable future, in other words it's sustainable. So a typical example would be solar energy. It is often said that there's enough solar energy falling on the surface of the earth to provide all of our needs many times over, as long as we can figure out a way of getting access to it.
SFR: Yes a lot of people seeing solar and wind as the main sources of renewable energy but they say “Ah but the wind doesn't always blow and the sun doesn't always shine and they're all very expensive to put in so are why we wasting our time with it?”
HEYES: We're not wasting our time with it, ultimately the sun is arguably the only long term source of energy that we’ve got, even the wind is arguably just another manifestation of solar energy, it's a function of the sun's heating of the atmosphere of the planet.
SFR: Right.
HEYES: So, and that will be available for thousands, millions of years to come, coal, oil, gas, uranium will not. They are all finite resources and can be consumed to exhaustion. Renewable energy is expensive? Well arguably, no it is not. The cost of solar energy has come down dramatically, the learning in wind energy technology is reducing the cost there as well to the point where if you had a greenfield site and asked yourself I want to build a power station what kind of power station should I build? Then from that starting point wind is very close to being the cheapest option in terms of the cost of each unit of electricity that you would generate.
SFR: But can we build enough of these wind turbines to meet demand because there are a number of constraints. Surely there's the constraint in terms of the amount of land area that it would use, there's also surely a constraint in terms of rare earth metals which you need to put into the actual mechanics of the generator? Is that being thought through, can we actually work with that limitation?
HEYES: The honest truth is I don't have the facts and figures on whether or not we can continue to make enough magnets and whether the rare earth is the constraining factor. I suspect, I suspect it isn’t, because it is true that you would really struggle to run your entire energy system based on wind for the very simple reason that as we know there are times when it's not available, so there's, there are rules of thumb that dictate how much energy or electricity you could sensibly get from wind and it's to do with the capacity credit calculation that you do. If you have an electricity system based one hundred percent on coal for example and you install a wind farm and the wind farm has the same capacity as say a coal fired power station and the very first wind farm that you install if it has the same capacity as the power station then you can probably close down the power station. So you get a full capacity credit for the wind but of course you then introduce some uncertainty into your system, but that's okay because the system already had some uncertainty in it, it already had the capacity to react to a trip of a power station for example. So that's okay, you can you could live with the extra risk that the wind provides but then if you put in another wind farm equivalent to another coal fired power station, can you do it again, can you close another one? And the answer of course is no, the more wind you install, the less conventional it can displace because you do need that sort of backup in the system and it is difficult, it's not a precise calculation, there are rules of thumb that imply that you can reliably get about twenty percent of your electricity and that's probably a conservative estimate. So you shouldn't try to get more than that from wind without I suppose having some new technologies which are not already on the system that help you manage the uncertainty. In other words if we left the system exactly as it is and just started closing down coal or gas and replacing it with wind, you probably shouldn't go past twenty percent and if you want to go past twenty percent you're going to need something else to manage the uncertainty in wind.
SFR: Right, something else.
HEYES: Storage would be one option and using energy demand management is another option.

HEYES: Indeed.
SFR: Smart meters and things like that.

Lots to think about, especially when technology is constantly changing the rules.
Lots to think about in the wider sustainability context. I’m already looking into the Great Barrier Reef, combustible ice and automated ships. That’s all for next time. Who knows what else will have happened by then?

Have a great week and don't forget if you need a conference chair, a host for your awards night or a keynote speaker for your event I still have a few dates free in the diary. Get in touch.
I’m Anthony Day. Until next time.