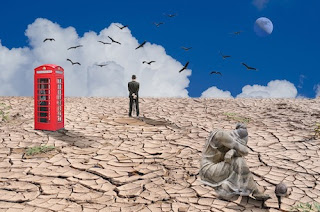 Well that's enough for this week.
I leave you with the news that Australia has just finished its warmest summer on record, that urban air pollution is getting seriously worse, but cooking a Christmas dinner creates more pollution in your kitchen than you’ll experience in central Delhi in India on a bad day, and following the launch of the Planetary Diet The Lancet warns about water shortages: “if current dietary trajectories continue, water use will be pushed to the edge of the defined sustainability boundary by 2050.”
And that’s it.
I'm Anthony Day  and I do this podcast every week because I believe that we are facing a very serious challenge in the form of climate change and not doing nearly enough about it. I believe that we can take action to avoid the worst consequences but recycling plastic bottles, installing solar panels and having a weekly meatless day at the individual level is not going to solve it. We need actions from governments. That's why each week I try and make as many people as possible aware that we can do things differently, they don't need to be worse, but if we sit on our hands and do nothing they could be disastrous. Politicians listen to public opinion. In a small way I’m tryin to educate public opinion.
Thanks for your support!
I am most grateful to my patrons who make a monthly contribution towards the costs of hosting the Sustainable Futures Report and I'd be very grateful if you're not already a patron if you would consider signing up for as little as $1 per month. Apart from that I get no subsidy, support or sponsorship.
Send me your email address if you'd like to be reminded of each new episode. I shall be updating the website over the next few weeks and there will be a link there which will allow you to subscribe, or indeed to unsubscribe.
Thanks again for listening. Thanks for your support.
I'm Anthony Day
That was the Sustainable Futures Report for Friday, 8 March 2019. That means there’ll be another on Friday the 15th.
Till then!

MPs debate climate after school strike – but only a handful turn up
https://www.theguardian.com/politics/2019/feb/28/mps-debate-climate-after-school-strike-but-only-a-handful-turn-up

Pollutionwatch: when smog builds up, cities need to act
https://www.theguardian.com/environment/2019/feb/28/pollutionwatch-when-smog-builds-up-cities-need-to-act

https://www.independent.co.uk/news/health/air-pollution-roast-dinner-particulates-lung-heart-disease-london-delhi-a8783026.html
Posted by Anthony Day at Friday, March 08, 2019 No comments: