Rebel News
Welcome to another episode of the Sustainable Futures Report. It's Friday, 11th October and I'm Anthony Day.
I visit London 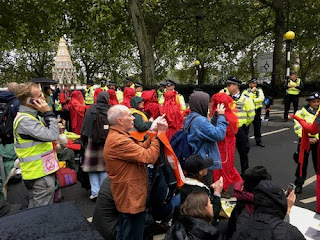 As you can hear, this week marks the start of the International Rebellion led by Extinction Rebellion and I bring you my impressions of the first day in London, including an explanation of a Citizens’ Assembly, and interviews with a lady dressed as a rubbish heap, protestors on Millbank and at Lambeth Bridge. What does Section 14 mean to demonstrators? Why is XR disrupting cities around the world? Greta Thunberg - love her or hate her? Who are the uncooperative crusties in hemp-smelling bivouacs? Oh, and I didn’t speak to Julia Hartley-Brewer this week. It’s worth staying on to the end of the episode as I’ll be playing out with a selection of the Yorkshire Remain Voice Choir’s greatest hits. 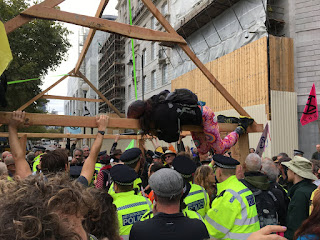 The International Rebellion
Yes, the international rebellion started on the 7th of October with demonstrations in London, Paris, Amsterdam, Berlin, Madrid, New York, Toronto, Melbourne, Wellington, Rome, Los Cabos, Vienna, Buenos Aires, in Sri Lanka and in other cities all over the world. It's planned to disrupt those cities for two weeks, until the 19th October. It's a situation which is changing all the time, so by the time you hear this things will be very different. In London, for example, police have just stepped up the pressure on demonstrators by issuing a Section14 order.
Section 14
Section 14 of the Public Order Act allows the police to impose conditions on a public procession or assembly if the police reasonably believe that it may result in: 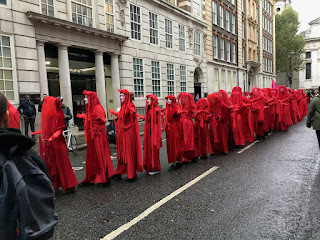 The present order requires demonstrators to leave the points around Westminster where they have set up their obstructions and move to the pedestrianised area of Trafalgar Square. If they do go there, I believe that as I write this on Wednesday morning they will be addressed by Stanley Johnson, father of the present prime minister.
If they don’t move on, and they defy the order, they face arrest with a fine of up to £1,000. Organisers face a fine of up to £2,500 and up to 3 months in prison. Even so, it appears that some rebels are staying put. According to http://www.legislation.gov.uk/ukpga/1986/64/section/14 it is a defence for a person to prove that their failure to comply with the order arose from circumstances beyond their control. It will be interesting to see how that might be used in court.
Equipment Snatched
It appears that the government have now ordered the police to seize tents and equipment that the rebels have brought with them. This follows a pre-emptive raid last weekend when police seized tents, food, first-aid kits, disabled toilets and other equipment and arrested 9 people for conspiracy. The Metropolitan Police has come under severe criticism for its handling of Operation Midland, a totally unconnected investigate which cost millions and was not only unsuccessful but involved alleged misconduct by certain officers. It was also criticised for its handling of the XR protest at Easter, so for both these reasons it will be anxious to restore its reputation by taking firm and effective action in the present case. Arrests are reportedly up to 600 by now, the middle of Day 3, which puts pressure on resources. There are only so many cells in London police stations and arresting officers must accompany those whom they arrested to the station, so while they are doing that they cannot be on the streets.
Crusties… 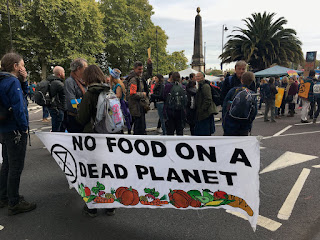 The prime minister turned to abuse when talking about the protest, labelling rebels as “uncooperative crusties in hemp-smelling bivouacs.” Of course you’ll hear from my interviews that that is far from the truth, but when you cannot dispute the facts it’s an age-old tactic to attack the messenger. He went on to suggest that they should read Margaret Thatcher’s biography and learn that she was warning about climate change long before Greta Thunberg was born. Yes, but warnings are not enough. Where are the actions, Boris, or don’t you believe that Mrs Thatcher was right?
Lay off Greta!
And talking of Greta Thunberg, why are so many people criticising her? She happens to be a particularly persistent sixteen-year-old whose message is “take notice of the science.” Please don’t criticise her for not having solutions; you’d hardly credit them if she had. She’s pointing the finger directly at governments. It’s their responsibility to assess the risk, assess the science and do what’s necessary to keep us all safe.
Why Rebel?
Why is Extinction Rebellion carrying out its present action? As I’ve mentioned before, it has three demands:
Tell the truth
Government must tell the truth by declaring a climate and ecological emergency, working with other institutions to communicate the urgency for change.
Act Now
Government must act now to halt biodiversity loss and reduce greenhouse gas emissions to net zero by 2025. 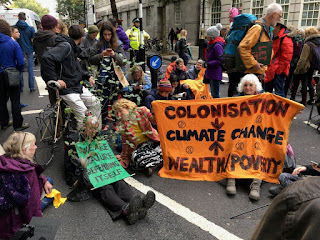 Citizens’ Assembly
Government must create and be led by the decisions of a Citizens’ Assembly on climate and ecological justice.
What actually is a citizens’ assembly? As I walked from Trafalgar Square down to the Cenotaph I met two people who were eager to explain.

Assembly interview - rebels from Oxford explain the concept of a citizens’ assembly
Glued to street - I pass four people glued to the street and each other. (No Comment)

As I passed on past Parliament Square…
I cam across something which looked like a heap of plastic rubbish. It wasn’t.
Plastic Protest - young lady covered in plastic rubbish - at first sight it was difficult to see there was a person there.
Further interviews with rebels from all round the country.
And that’s just a small selection of the 53 recordings I made during the day. My final image is of a long line of ladies with whited faces and clad in flowing crimson robes who walked slowly in front of the police lines blocking Millbank, gazing silently into the eyes of each officer. I recalled the chant I heard earlier:
Police
We love you
We’re doing this for your children.
I went home and left others to look after my future. 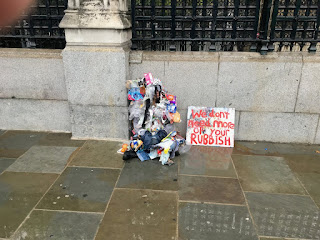 And Finally…
I didn’t talk to Julia Hartley-Brewer about the XR protest today. They did ring me at 08.10 and invited me on at 08.18 but I decided against it. The man they did get on - from Animal Rebellion - did pretty well against her constant criticism. Her pattern of attack is becoming predictable: I need to prepare for it next time. She then spoke to someone who told her that everyone associated with XR was in a cult, with the aim of turning us back to a stone-age civilisation. Yes that’s right. If you can’t refute the facts just misrepresent  and demonise the messenger.
It can all be very depressing, and indeed XR has grief counsellors for those who find it all too much. Of course people may say that XR is wilfully overstating the case, but as I said many times before, there’s a crucial balance between overstating the case and understating it to the extent of complacency. The same message may have opposite effects on two different people. Personally I believe we need to take action. That may involve an implementation plan which could cover twenty or thirty years, but once we have that plan we have a framework to help people see where we are going and why we need to go there. I think a citizens’ assembly could be a valuable way of establishing the credibility of such a plan. Whether its recommendations should be advisory or mandatory - well maybe mandatory, because governments have a sad track record of ignoring experts.
That’s enough for today. There won’t be another Sustainable Futures Report next Friday as I’ll be travelling. You did get an extra one in September.
And now, as promised and on a completely different note, here’s the Yorkshire Remain Voice Choir.
Till next time!

Section 12 and section 14
(1)
If the senior police officer, having regard to the time or place at which and the circumstances in which any public assembly is being held or is intended to be held, reasonably believes that—
(a)
it may result in serious public disorder, serious damage to property or serious disruption to the life of the community, or
(b)
the purpose of the persons organising it is the intimidation of others with a view to compelling them not to do an act they have a right to do, or to do an act they have a right not to do,
he may give directions imposing on the persons organising or taking part in the assembly such conditions as to the place at which the assembly may be (or continue to be) held, its maximum duration, or the maximum number of persons who may constitute it, as appear to him necessary to prevent such disorder, damage, disruption or intimidation.

A person who takes part in a public assembly and knowingly fails to comply with a condition imposed under this section is guilty of an offence, but it is a defence for him to prove that the failure arose from circumstances beyond his control.

A person guilty of an offence under subsection (5) is liable on summary conviction to a fine not exceeding level 3 on the standard scale. - max £1,000

https://www.bbc.co.uk/news/uk-49967784
Extinction Rebellion protesters on the streets of London have been labelled "uncooperative crusties" by Prime Minister Boris Johnson.


https://www.telegraph.co.uk/news/2019/10/09/extinction-rebellion-london-arrested-protesters-ordered-not/
Posted by Anthony Day at Friday, October 11, 2019 No comments: