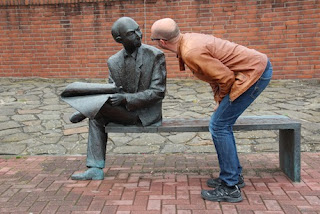 Hello and welcome to the first Sustainable Futures Report of the year published on Friday 3rd January 2020. I’m Anthony Day and I’d like to welcome first of all our newest patron, Manjunath Ramesh. He’s told me about the world’s most dangerous GHG. We’re looking into it. More in a future episode.
This episode is about ideas. I asked you suggest in 100 words your ideas of what we should do in 2020. But first, I’ve had some ideas from Ian Jarvis, following up on previous topics. He points me to a study from the University of California, Davis:
“Grasslands More Reliable Carbon Sink Than Trees”.
The report suggests that increased drought and wildfire risks are making grasslands better than trees at locking up carbon. Indeed, wildfires can turn trees from a carbon sink to a carbon source.
Unlike forests, grasslands sequester most of their carbon underground, while forests store it mostly in woody biomass and leaves. When wildfires cause trees to go up in flames, the burned carbon they formerly stored is released back to the atmosphere. When fire burns grasslands, however, the carbon fixed underground tends to stay in the roots and soil, making them more adaptive to climate change.
The researchers accept that trees can store more carbon than grasslands, but the fire risk makes them less effective overall as a carbon sink. They urge an international re-assessment of carbon management policy. This is particularly compelling given the continuing and worsening bush fires in Australia. I don’t know whether the land where the trees have gone will support grassland, although nothing at all is likely to grow while the Australian drought continues. According to Time magazine, the bushfires have emitted a combined 306 million tons of carbon dioxide since Aug. 1, which is more than half of Australia’s total greenhouse gas footprint last year.
Solving Tornadoes
Ian sends another link - you’ll find it on the Sustainable Futures Report blog - a link to the Solving Tornadoes blog. There’s an article here which suggests that wind-farms cause drought. The theory is that the turbines cause turbulence which prevents the formation of storms which otherwise would deliver rain. The author suggests a high correlation between the location and timing of drought with construction of wind farms, especially in Texas and California. Follow the link and see what you think.
And now for those hundreds of words.
I said, “Finally the world seems to be realising that we have a climate crisis and it’s serious. In not more than 100 words, what should we do in 2020?”
Richard James MacCowan of Biomimicry, who spoke to us in December, came up with two ideas. Here’s his first.
“I would say it’s for the lay person at home. Let’s start in your back garden. Instead of buying all those plants that soak up lots and lots of water go and find neighbours who have been there a long time and have got plants that don’t need watering or ones that soak up water if you get a lot of rain, and plant more of them. Then you don’t need to water your garden so much and it allows the reservoirs to keep stock of the water. That’s a thing people could do in Spring.”

Andy Walker of Sure Insulation had no hesitation in answering. He specialises in retrofitting insulation to homes to make dramatic cuts in energy use. He says,
“I’m encouraged that the awareness and concern about the Climate and Ecological Crises is on the rise.
But there’s still a long way to go before the wider public really understand the life-threatening seriousness of what’s happening to our world.
In 2020 there are three hugely important priorities:

Back in October Extinction Rebellion took over the streets of London. One person determined not to be moved, to the extent that she was arrested, is Laura Cox. Here’s what she said:
“A huge debate comes with asking 'what we should do'. Who is we? To what extent are 'we' obligated to act? There's no prescriptive list, and imposing the 'should-do' narrative is more likely to hinder than help the cause. However, that being said, 2020 will be incredibly important. In 2019, XR very much started the climate conversation. Moving into the new year, I'd like to see local groups grow and become a real force to be reckoned with. I see great value in community outreach, and building connections with climate-conscious organisations across the UK and the rest of the world."
Thanks, Laura.
Here’s Richard MacCowan’s second idea.
“Buy a magnifying glass and start understanding how the natural world works, understand the complexity, understand the way it can do things without using as much energy. Watch how the insects pollinate your garden and how they’re not going to every single flower and then they’ll fly off because they can’t expend all their energy. Think about that way when you’re doing your own daily lives.”
Yes, let’s learn from the natural world.
Carol Dance got in touch from Sydney, Australia.
“Dear activists,
“Don’t focus on changing the deniers.  Focus on the ‘adaptors’.  Understand their rationale, which is often:  ‘What could two or four degrees more matter?  We’ll just move to higher latitudes. Vegetables will grow in Greenland.  We will all eventually be OK once we adapt.’
“The activists’ reply:  ‘While the two or four degrees is a huge problem, the real problem is that greenhouse gasses now in the atmosphere will increasingly trap the sun’s heat.  The temperature will continue to rise, causing mass extinction.’
“Challenge the ‘adaptors’.  They are the problem now.”
Carol enclosed a photograph of herself wearing a teeshirt emblazoned with #STOPADANI. “What’s all that about?” I thought. Apparently, Adani is an Indian company planning to build the biggest coal mine in the world at Carmichael in Queensland. The 60m tonnes of coal extracted annually will generate emissions equivalent to those from the whole of Belgium. Adani has also been associated with plans to dredge a passage through the Great Barrier Reef so that ships carrying coal can pass through. The Stopadani movement seems to be much like XR, and has a network of some 125 community groups across Australia. The current furore over the links between coal and climate change and between climate change and the droughts which facilitate bushfires will certainly keep this battle going. I’m sure we’ll hear more in the course of the year.
Finally, Sarah Tuneberg, who spoke to us just before Christmas, came up with a neat and concise response:

She went on to say,

"I think we invest a lot of time and energy in, and I think appropriately so, in things like reducing our own climate footprint. Recycling, advocating, doing our own part, but I think there's this other piece that we forget which is storms happen, wildfires come, power goes away, and so making sure you're prepared and you have a plan is the strategy that we should also deploy to ensure ourselves and our family are safe."

Thank You
Thank you to all contributors. And if you’ve got ideas which you’d like to add, let me know via mail@anthony-day.com. If you’re a patron and would like to explore these ideas and any others through a round-table discussion on Skype of similar, you can contact me at the same address.

And what about my 100 words? Here goes:
Let’s make 2020 the clean air year. Long before Sydney was overwhelmed by the smoke from the bushfires there were concerns about poor air quality in Beijing, in Delhi, in London - in fact in most major and minor cities across the world. If we don’t tackle it people will die prematurely from respiratory diseases. Children’s development, mental and physical, will be damaged. Let’s find ways of managing pollution from transport and from coal-burning power stations while we develop ways to eliminate fossil fuels. And if we clean up the air we breathe, we cut GHG emissions as well.
99 words.
Did I wish you a Happy New Year? Although there are many grounds for pessimism on both the climate and the political fronts, let’s be positive. If we don’t meet the climate challenge let it never be said we didn’t try. And in the meantime seek out and enjoy laughter, fellowship and family, and the kindness of friends.
I’m now taking a break until 14th February, but don’t worry, I already have offers from interviewees, a raft of news clippings and that lead from newest patron Manjunath Ramesh, so there will be plenty to go at once I get back to my desk.
In the meantime check out the links to all these stories on the Sustainable Futures Report blog - and maybe have a listen to some episodes you’ve missed.
Have a Happy New Year.
I’m Anthony Day.
That was the first Sustainable Futures Report for 2020.
No doubt the first of many.
Until February.